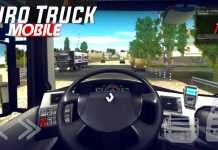 How To Install Bus Mod in Euro Truck Simulator 2

Euro Truck Simulator 2 | we can own our own trailers